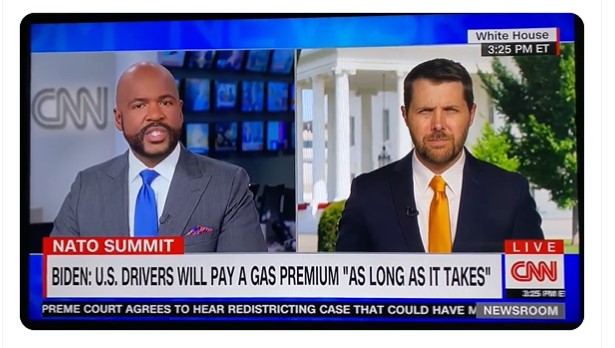 When asked how long American drivers should expect to deal with high fuel prices, Biden told reporters “as long as it takes, so Russia cannot in fact defeat Ukraine and move beyond Ukraine.” He continued, “this is a critical, critical position for the world.”

With all of this being said, comments just made by President Joe Biden’s director of the National Economic Council, Brian Deese, are causing a strong kickback to his statement on Twitter.

Deese said that Americans paying high gas prices is needed for the “future of the liberal world order.”  In what is a HUGE Red Flag for those tracking the Great Reset, Deese was formerly the global head of sustainable investing at BlackRock.

CNN anchor Victor Blackwell interviewed Deese on Thursday and cited that Director of National Intelligence Avril Haines said on Wednesday the war between Russia and Ukraine could be a “grinding struggle” for years.

Blackwell said, “I think everybody understands why this is happening but is it sustainable? What do you say to those families who say, listen, we can’t afford to pay $4.85 a gallon for months, if not years? This is not sustainable.”

He replied, “What we heard from the president today was about the stakes. This is about the future of the liberal world order, and we have to stand firm.”

“But at the same time what I’d say to that family, to Americans across the country, is you have a present administration that is going to do everything in its power to blunt those price increases and bring those prices down,” Deese added.

BIDEN ADVISOR BRIAN DEESE: "This is about the future of the Liberal World Order and we have to stand firm." pic.twitter.com/LWilWSo72S

Conservatives on Twitter blasted the Biden admin for putting the “liberal world order” ahead of America’s interests.

Another great election slogan for the Dems & Biden: 'Hey, America, suck it up for the Liberal World Order.'https://t.co/WRIuuIhbWe

The White House openly stated that you’re just going to have to pay more in gas so that they can hold the “liberal world order” together and it barely registers as breaking news.

They’re telling you EVERYTHING they plan to do and most don’t even care.

Inflation is causing money to be tight for many people, especially senior citizens barely able to buy food.

Sustained high gas prices are causing people to drives less because they can’t afford it.

We will not be paying for Biden’s liberal world order.

What Deese said was intentional, not a slip of the tongue.

The globalists have moved on from parsing their verbiage, to flat out supporting their agenda with them.

They are now insisting that any pain that the average person is feeling as a result of their global ambitions, is just part of the process, and should be expected to remain.