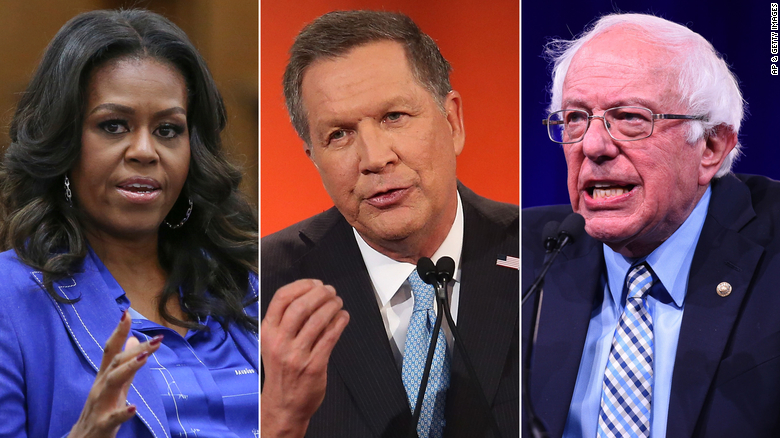 AOC? Only Gets “Some Role” At Convention! DNC Instead Gives Prime Time Slot To RINO Kasich!

Alexandria Ocasio-Cortez (AOC) is popular on social media platforms, with Marxist and in her own district, but when it comes to democratic leadership, a useful tool for turn out, nothing more.

Sure Crazy Bernie will do press conferences if pushing the march towards communism, but with a strained relationship with Speaker Pelosi, Alexandria is semi-blacklisted and will not see any significant promotions during Nancy’s reign as Spreaker Of The US House.

Politico is reporting the plans for the Democratic National Convention indicate that progressive New York Congresswoman Alexandria Ocasio-Cortez will not be giving a speech for the program of events, while former Ohio Governor John Kasich- a nominal Republican- will be speaking in a primetime slot in support of Joe Biden for President.

Kasich with Bernie Sanders will share a night in the spotlight, and both Clintons are slated to have prominent speaking roles at the all-virtual Democratic National Convention in less than two weeks.

Others who’ve been tapped for coveted speaking slots during an event that’s been shrunk down to eight prime-time hours over four nights are Elizabeth Warren, Kamala Harris, and Jill Biden. And it goes without saying that the party’s two most popular figures, Barack and Michelle Obama, will be featured prominently.

The prioritization of Kasich over Ocasio-Cortez shows Biden’s interest in appealing to suburban affluent Republican voters, even if it comes at a detriment to turning out the Democratic base of urban millennials. The strategy could backfire significantly, especially if Ocasio-Cortez herself chooses to respond in kind and only provide lukewarm support for Biden.

Initial reports suggested that AOC would be given a primetime speaking role but it now appears that AOC will instead speak in a limited capacity, in a function reflecting her role as a leader of Biden’s climate working task force.

But on Saturday, the drama over whether Ocasio-Cortez was in or out was settled. A source familiar with convention planning confirmed to POLITICO that the congresswoman “will have some role.”

Other prominent Democrats, including House Speaker Nancy Pelosi, will have roles. But given the time constraints — two hours of programming each night from August 17-20 — the Biden campaign is making some ruthless cuts.

Joe Biden may be the only individual to speak personally from the convention hall in which the event is principally located, on account of coronavirus social distancing measures. Biden campaign operatives are reportedly making “ruthless cuts” to accommodate for the digital nature of the event, forcing out many Democrats who would otherwise speak at the convention in person.

Kasich will speak on the same night as Vermont Independent socialist Senator Bernie Sanders, in a gesture that’s intended to highlight the range of Biden’s base of support.

Talk about the F-Team. From bartender AOC to Sleepy Joe, this group of godless progressives, have nothing to offer the American voter to accept the promises of big government and the tyranny and control that comes with it.

The groups’ collective ideology is failing in Portland, Chicago, Baltimore, and NYC, and if finishing off Venezuela, so we must say NO, for our countries sake.