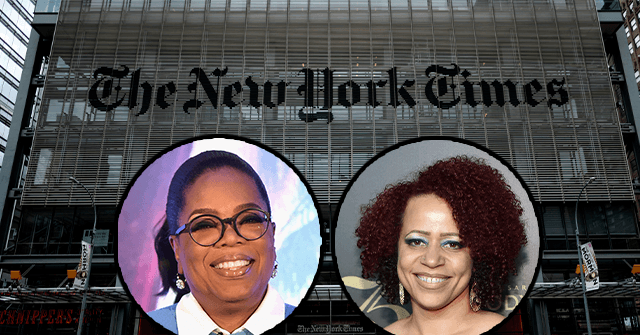 A racist and “Social Justice Warrior” activist has been elevated to great heights by the New York Time’s publishing of her “‘The 1619 Project”.

The author, Nikole Hannah-Jones, recently confirmed that she wrote a 1995 letter to Notre Dame University’s student newspaper. In it, she wrote; “the white race is the biggest murderer, rapist, pillager, and thief of the modern world.” In this same letter, she likened Christopher Columbus to Adolf Hitler.

Her 1619 Project is full of errors and historical revisionism. For example, one of the project’s key historical claims was that the Revolutionary War was fought to preserve the slave system, it had to be corrected after numerous renowned historians criticized the project for relying more on an ideological narrative than on historical fact. Like Howard Zinn before her, Hannah-Jones chose a narrative and then bent bits and pieces of facts to fit into it.

Oprah Winfrey is partnering with Lionsgate to turn The New York Times’s 1619 Project into feature films and television programs.

The 1619 Project is a series of essays and multimedia creations produced by The New York Times and one of their leading writers, Nikole Hannah-Jones. The purpose of the project is to reframe American history by claiming that America’s founding is based on racism instead of equality and liberty. Hannah-Jones’ goal in creating the project was to show how slavery and racism have had a lasting effect on all of America’s institutions.

The Project is repackaged critical race theory, which argues that America and its laws, systems, and institutions are innately racist. This effort to extend The New York Times’s reeducation program into popular culture is particularly dangerous because stories have the power to change minds through emotion instead of reason.

It is fascinating that two of the most privileged women in America, Pulitzer Prize-winning journalist Hannah-Jones and media empire queen Oprah Winfrey, are advancing the claim that black people are still systematically oppressed. No reasonable person denies that there are still instances of racism and pockets of people with provincial racist attitudes, but to call fundamentally oppressive a country that has provided its citizens more opportunity than any society in history is nonsensical. Winfrey and Hannah-Jones’ own success is a testament that, although there might be obstacles, success in this country is possible for anyone.

Turning the 1619 Project’s debunked history into film could set the narrative on American history for decades. Most Americans do not fact-check the films they watch. Destroying American heroes in film and on television by overemphasizing their flaws and underemphasizing their contributions will do more to demoralize American patriotism than any statue toppling.

Just like the “Gay” marriage issue, which went from unpopular to normative, in only one generation, the pop culture is expected to use Oprah and Lionsgate’s efforts to change the mind of today’s youth, leading them to believe that America is racist and the remedy for its past wrongs is to diminish the shrinking white race’s opportunities while demanding reparations. It is incumbent of We The People to teach our children true Amerian history and fight back against this “1619 racist propaganda project.”