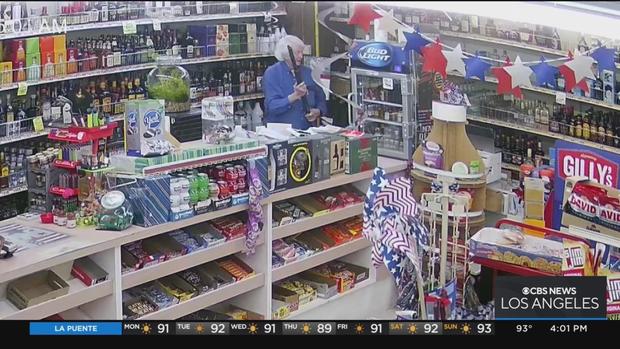 In Southern California, a store owner turned the tables on a would-be robber.

The criminal, armed with what looked like an assault rifle, was caught off guard by the response of the 80-year-old Norco convenience store owner Craig Cope.

The event took place an hour East of Los Angeles, near San Bernardino, and was all caught on the store’s security cameras.

The thug attempted the robbery at 2:45 a.m. Sunday morning, and I am sure they did not expect the owner to be armed and willing to fire away.

“He saw on the surveillance — he saw them coming out of the vehicle with weapons,” said Marnie Tapia, one of his employees.

When convenience store owner Craig Cope noticed on surveillance cameras that armed men were going to enter his store, he moved strategically around the counter and grabbed his shotgun.

Cope, video footage shows, quickly fired at the first armed suspect who entered the store, sending him and the other men fleeing.

“He shot my arm off!” one of the armed suspects is heard yelling on obtained surveillance footage (see below).

With one suspect driving, the footage shows at least three others rush into a black BMW, which was reportedly stolen, before quickly speeding off out of the parking lot.

Reports say all four suspects showed up at a local hospital, where three were arrested, and one is still being treated.

“He saw on the surveillance — he saw them coming out of the vehicle with weapons,” said Marnie Tapia, one of Cope’s employees.

“I’m proud to call him my boss,” Tapia said. “He makes us feel better about being here, you know.”

“It saved his life,” Tapia said of her boss’ quick action. “I think it did.”

Tapia said Cope sustained a heart attack over the traumatic experience, adding that the store owner would recover fully.

The business recently had cameras installed over the surge in crime in the area.

“The sheriff came in and warned me about eight months ago or so that this was going on and to keep an eye out and pay attention, be on your toes,” Tapia recalled.

The suspects are being held on $500,000 bail, and charged with robbery and conspiracy.

#WATCH: "He shot my arm off," cries would-be robber after 80 year old #Norco store owner shoots him with a shotgun. Four arrested, one remains in hospital. Store owner expected back at work. pic.twitter.com/i3LAVdv5WL

For me, this shooting was 100 percent justified.

In the former Golden States, politicians have embraced criminals and rejected the police.

As a result, the only real chance this store owner had of stopping this crime and most likely from being harmed physically in the process, was to use the weapon he lawfully owned, via his 2nd amendment right.

Most local police officers can’t get to a 911 call for several minutes, so more Americans must become armed, as the culture continues to decline.

It’s more often becoming us against the bad guys and girls on our own.