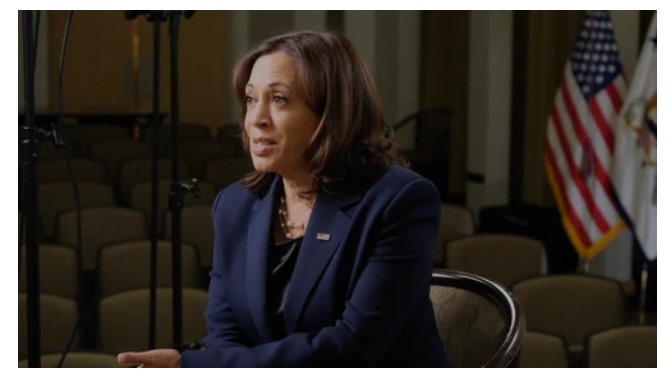 Around 50 more migrants got off a bus outside Vice President Kamala Harris’ residence in Washington, D.C., Saturday.

The D.C. bus carried people mostly from Venezuela, including a one-month-old baby. Aid workers quickly whisked the migrants away to a local shelter.

The transports come as the immigration issue has again rocketed to the forefront of national attention after planes carrying migrants arrived in Martha’s Vineyard, Massachusetts.

Harris has been tasked with dealing with the “root causes” of migration to the U.S.-Mexico border, which she said on Sunday was “secure.”

"The Border Is Secure" Kamala Harris

That statement received heavy pushback from Border Patrol agents, who say it is “far from secure.” 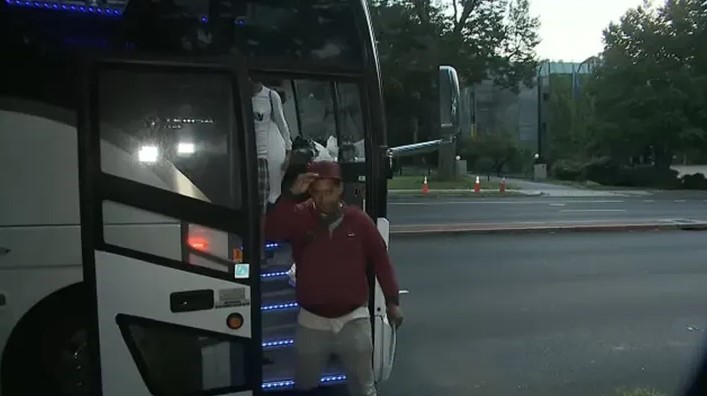 Harris accused Republican governors of a “dereliction of duty” in a Vice News interview, and Emhoff called the arrivals “shameful” and a “political stunt.”

When asked by Vice what the “solution” to the migrant crisis is, Harris mentioned nothing about border security. Instead, she blamed former President Donald Trump, saying his administration “decimated” the immigration system. “So we have been spending in the last 18 months an incredible amount of time and work and resources to reconstruct that system,” she said.

The VP again ignored a question on Friday about the arrival of migrants near her Washington, D.C., residence.

Then later Friday, her husband, second gentleman Doug Emhoff, called it “shameful” and a “political stunt.”

“These are human beings,” Emhoff told reporters after receiving a COVID-19 booster shot. “These are people. They needed to be treated with dignity, with kindness and respect, and they weren’t. And we have so-called leaders in this country who rather than focusing on what’s good for the public within their own states, they’re using people as pawns for a political stunt.”

Others have said the transports have exposed hypocrisy on behalf of Democrats who support sanctuary city policies.

In Massachusetts, the migrants sent to Martha’s Vineyard by Florida Gov. Ron DeSantis were bussed Friday to Joint Base Cape Cod where Gov. Charlie Baker has set up a shelter.

The arrivals have drawn sharp reactions from the White House. Press secretary Karine Jean-Pierre accused Republican governors of treating the migrants “like chattel.”

During Friday’s press briefing at the White House, Jean-Pierre slammed the transport of illegal migrants from Texas, Florida, and, Arizona to liberal states calling them a “political stunt” meant only to cause “chaos and division.”

“While we’ve been focused on the things that matter to the American people, Republicans have spent this week sowing chaos and division, engaging in cruel political theater and working to roll back rights and benefits that Americans have enjoyed for generations,” she said.”

Martha’s Vineyard was slammed on Twitter for declaring a “humanitarian crisis”.

After the news broke, Martha’s Vineyard’s Chamber of Commerce released an update on what they called a “humanitarian crisis.”

“To our Island community, here is an update on current humanitarian crisis on Martha’s Vineyard….we thank people for their continued help,” the account wrote.

To our Island community, here is an update on current humanitarian crisis on Martha's Vineyard….we thank people for their continued help. pic.twitter.com/f9YRJSJPow

Twitter users mocked the update, noting that the announcement itself reported only “approximately 50 individuals” present in the city while border towns struggle with thousands per day.

Washington Examiner columnist Becket Adams tweeted, “i’m sorry, putting out a public notice of this nature for an influx of *50* people is objectively funny. FOR IMMEDIATE RELEASE.”

i'm sorry, putting out a public notice of this nature for an influx of *50* people is objectively funny.

Electric Cars Are Not Green – Not Enough Minerals For Expected Demand
Facebook Spied On Private Messages Questioning 2020 Election, Sent Them To FBI